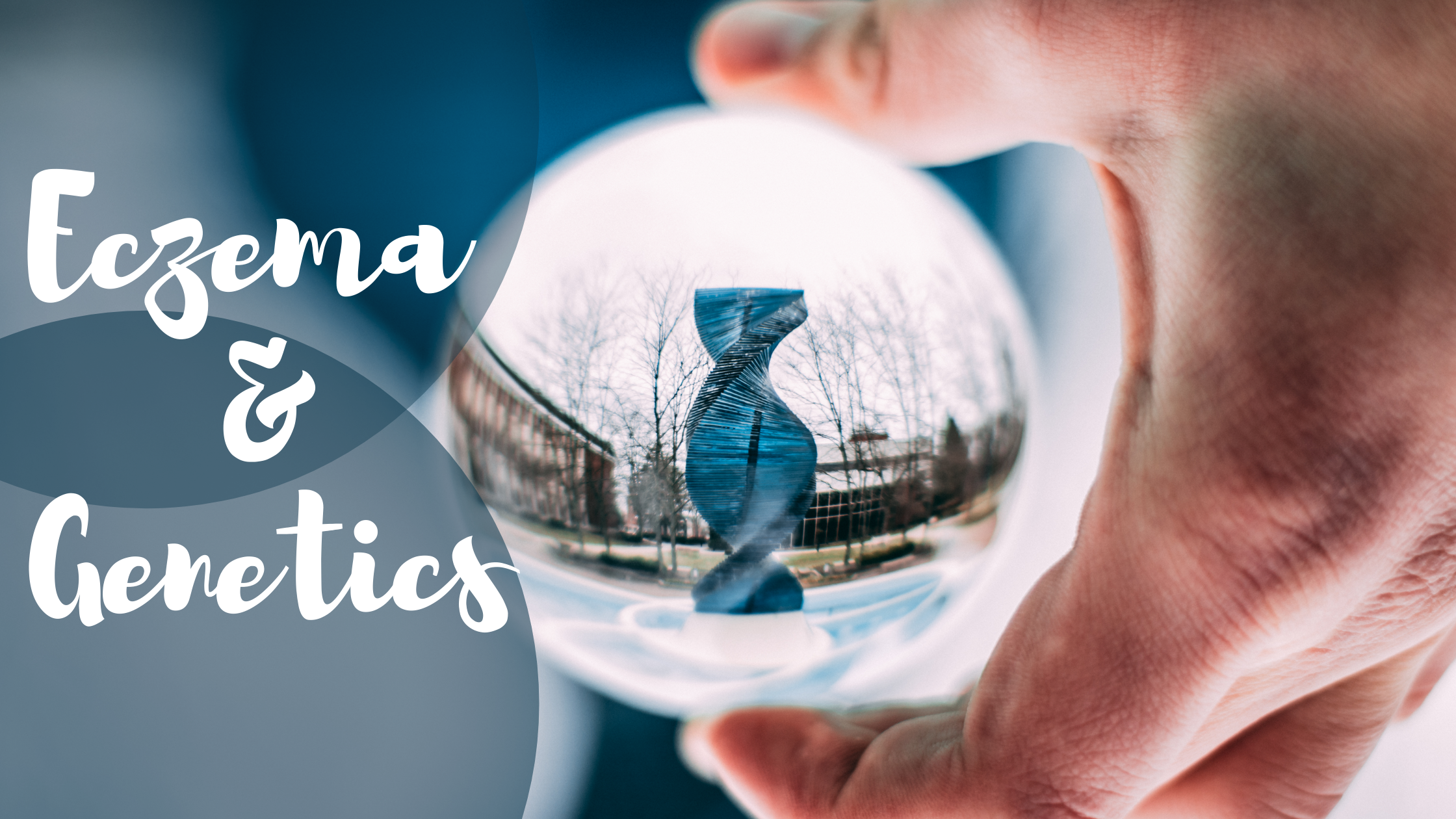 Just Imagine if you and your spouse both develop or have a chronic skin condition like Eczema, one of the most common questions that will hit your mind while planning a baby will be what are the odds that kid will have it too? Is eczema Genetic

Unfortunately, it turns out that the odds are high because chronic skin conditions like Eczema have a strong basis in genes. The symptoms may or may not develop depending on the functionality of the gene.

Before entering into the actual topic let us have an overview of what exactly eczema is? Also known as Atopic Dermatitis, Eczema is a chronic skin condition characterized by red, scaly, itchy, and inflamed skin when the symptoms are visible. It develops cracks and sometimes oozes at its peak. Its characteristic that tempts the affected person to incessantly scratch gives it its name an itchy rash.

Affecting around 15-20% of children and of 1- 3% of adults’ Eczema is not contagious but it has a characteristic of passing in a generation that is from parents to kids. Well, it is not compulsory that if a parent has eczema the kids will also have, but it increases the chances. For e.g. if both the parents have eczema then there is an 80 % chance that the kid may have eczema.

Though the exact reason for the onset of eczema or the most common type of Atopic Dermatitis is not known, the current thinking is that it is caused by the combination of factors that may include.

It is also found that certain geographic factors also play its part in eczema. For e.g. people living in cold climatic conditions and urban cities with high air pollution rates are more prone to this skin condition.

The link between eczema and genes

It is understood that the onset of Eczema is somehow related to the auto-immunity of an individual which also confirms the link between Eczema and gene mapping of the person. For a very long period of time, the exact cause of eczema was unknown. But the medical scientist has resolved it by stating that the combination of genetic and environmental factors are responsible for the development of the condition. In between environmental and genetic factors, genetics have more weightage.

In a normal individual, the skins outer layer forms a protective barrier that prevents it from invading foreign particles. This layer made up of a structural protein called Filaggrin “filament aggregating protein” which is encoded by a gene called FLG which constitutes a large segment of DNA that codes for the protein which we just came across.

It is found that the individuals lacking the functional copy of this gene FLG lack the protective layer of skin and often develop skin deficiencies that develop chronic skin conditions like Eczema. Many times, a mutation in the FLG gene can also lead to autoimmune conditions in people. This fact tells that eczema has something to do with the genes and can pass on to the next generation. In a whole population, around 10% of people inherit at least one version of the FLG gene from a big segment that has a slightly different DNA sequence2. These changes in the DNA sequence is unable to produce the amount of filaggrin protein that is required to form the protective skin barrier. As a result, the skin barrier is less able to prevent both water loss and the entry of pathogens.

The gene CARD11 provides useful information and instructions for making a protein that is involved in the function of immune system cells called lymphocytes. Certain types of lymphocytes particularly  T cells and B cells has a major role in supporting the immune system of the body. These cells identify foreign invaders such as bacteria, viruses, and fungi and defend the body against infection.

When T or B cells recognize a foreign substance, the CARD11 protein is turned on (or we can say it is activated) and attached to two other proteins named BCL10 and MALT1, to form the CBM signalosome complex. This complex in turn activates other protein complexes called nuclear factor-kappa-B (NF-κB) and mTOR complex 1 (mTORC1), which are important for cellular signaling. SO the chain continues to form a final signal and development to function the support the immune response against foreign invaders.

When this CARD11 gene gets mutated it doesn’t get activated when a foreign body invades and thereby the immune system gets compromised giving rise to various conditions one of them being atopic dermatitis.

Though till now we have mostly talked all about FLG mutations, which is one of the most predisposing factors to the eczema condition, other genetic variations can also be critical for the onset and severity of Atopic eczema. The presence of several susceptibility loci can be easily understood by the multi-factor symptoms of the disease that depends on the complex interaction between environmental factors like irritants, pollutants, weather, and microorganisms. To date, there are more than 30 known loci which are found to be associated with a higher risk of eczema.

Allergic disorders like eczema, asthma, or hay fever tend to run in families that is it may pass from one generation to the next. The transmission of genes from parent to child follows a certain pattern and this is called the inheritance pattern.

When the inheritance involves the CARD11 mutated gene, atopic dermatitis has an autosomal dominant inheritance pattern, which means one copy of the altered CARD11 gene in each cell is sufficient to cause the disorder.

Similarly, when it is associated with FLG gene mutations, the risk of condition follows an autosomal dominant pattern; a mutation in one copy of this gene is sufficient to increase the risk of the disorder.

There is no common test that can tell you whether you have eczema, except a physical examination by the physician who can confirm the disease.

In today’s advanced world people are very keen to know how likely they or their child have a chance of developing eczema. That’s very well justified because knowing whether someone has inherited a mutant copy of FLG is important clinical information. Because if a mutation is present in a new-born, then early intervention with proper care and standard moisturizers could help to prevent or delay the onset of atopic eczema which is most common in children.

By doing this one can improve the quality of life of eczema sufferer and its caregiver. This will also delay or completely avoid exposing the young skin to topical and systemic immunotherapies which are ultimately strong on the skin and expensive to the pockets.

Currently, there are few DNA testing Companies like 23andMe, AncestryDNA, etc. Which can be used to predict your or your child’s risk of developing eczema based on the DNA. Remember these are just predictions and not an exact verdict and conditions in your environment still play a critical role.

Other Genes associated with Eczema In another new study led by Mariana L Stevens, published in the journal Nature Communications, researchers found and delineated the two variations of the gene KIF3A that is said to be responsible for the impairment of the skin barrier that regulates water loss resulting to the onset of Eczema.

The observation from the study by the team led by Mariana L Stevens could drive the researchers to come up with genetic tests that could be used to diagnose the risk of developing atopic eczema in Infants. This could help the early detection of the condition and which may lead the way to come up with therapies targeting water loss from the skin. Thereby a possible solution to prevent eczema in early childhood can be found, as mentioned by the National Institutes of Health.

So here’s the answer to your question, Is Eczema genetic? There is a link between Eczema and genes which solves the long-lasting mystery for the cause of Eczema. While there are studies and researches which direct us to narrow down the reason for the onset of eczema targeting non-functional or mutant genes. Gene FLG is the major gene responsible for encoding a structural protein called Filaggrin and profilaggrin which helps in building a mesh-like skin outer layer. This layer functions as a preventive barrier preventing foreign particles invade from outside and preventing water loss from inside. Recent findings and studies could propel researchers to come up with an Eczema genetic testing kit specifically for Eczema which shall help us to find out the susceptibility to the disease. Eventually, a solution to battle Eczema is making great strides.