What is Microbiome: Role in Eczema and its Treatment 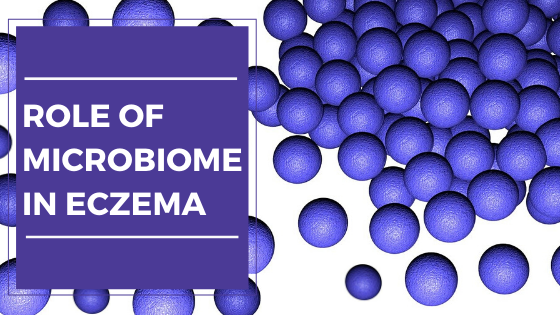 Want to know what is microbiome? We all know that our body is made up of innumerable cells. Scientists mention that an average human body approximately consists of 37.2 trillion cells, a few more or less depending upon the factors like size, weight, age, etc of an individual i.e. 37200000000000 that’s too many zeros, isn’t it?

What is the Human Microbiome?

One may always think of what is the human microbiome. Microscopic living things such as bacteria, fungi, viruses are called Micro-organisms and conveniently called Microbes. The genetic material of all the microbes – bacteria, fungi, protozoa, and viruses – that live on and inside the human body is collectively termed as Microbiome.

Though there are different types of Microbes that reside in and on the human body, the most studied are bacteria which are huge in number, hence its nothing wrong in saying that we more bacteria than a human.

What role does Microbiome have in the human body?

Have you ever come across questions such as What is the human microbiome? and what are their roles in the human body? Let’s check out below:

Microbes are present in every part of the body, on the skin, up the nose, but a chunk of them resides in the gut inside the large intestine. Microbiome plays a vital role in the development of immunity and nutrition. The bacteria in the microbiome help in digestion, regulate the immune system, produce vitamins, and protect against other bacteria that cause disease. New research says that gut microbiome may also affect the central nervous system, which controls brain function.

Similarly, microbes residing on the skin also play a critical role in skin health. Any alterations in the composition and function of these microbes lead to changes in immunity causing skin diseases, such as Eczema or Atopic Dermatitis as it is commonly known.

Eczema is a skin condition marked by red, itchy, inflamed skin. There is no direct known cause for eczema except that it is caused by the combination of genetic and environmental factors. But recently researchers linked the onset of eczema flares to the activity of microorganisms. Various environmental factors, such as stress, diet, and pollutants, affect microbial composition in the skin.

Skin microbiomes influence the skin barrier by controlling ecological factors, such as humidity, temperature, pH, and lipid content. These changes can exacerbate skin barrier impairment and are associated with abnormalities in the functions of skin barrier-associated genes. Earlier studies have found that the Microbe Staphylococcus aureus creates susceptibility to develop Atopic Dermatitis and is directly linked to Eczema Flares.

In an Experiment by Dr. Kong [1] and his team, the researchers sampled the skin of pediatric eczema patients, before a flare, during the flare, & after a flare and analyzed the bacteria, using advanced gene sequencing techniques. As a result, they could see more S. aureus during flares compared to samples taken before and after and from healthy controls. This clearly proves the association of S. aureus with eczema flares exacerbating the eczema symptoms. 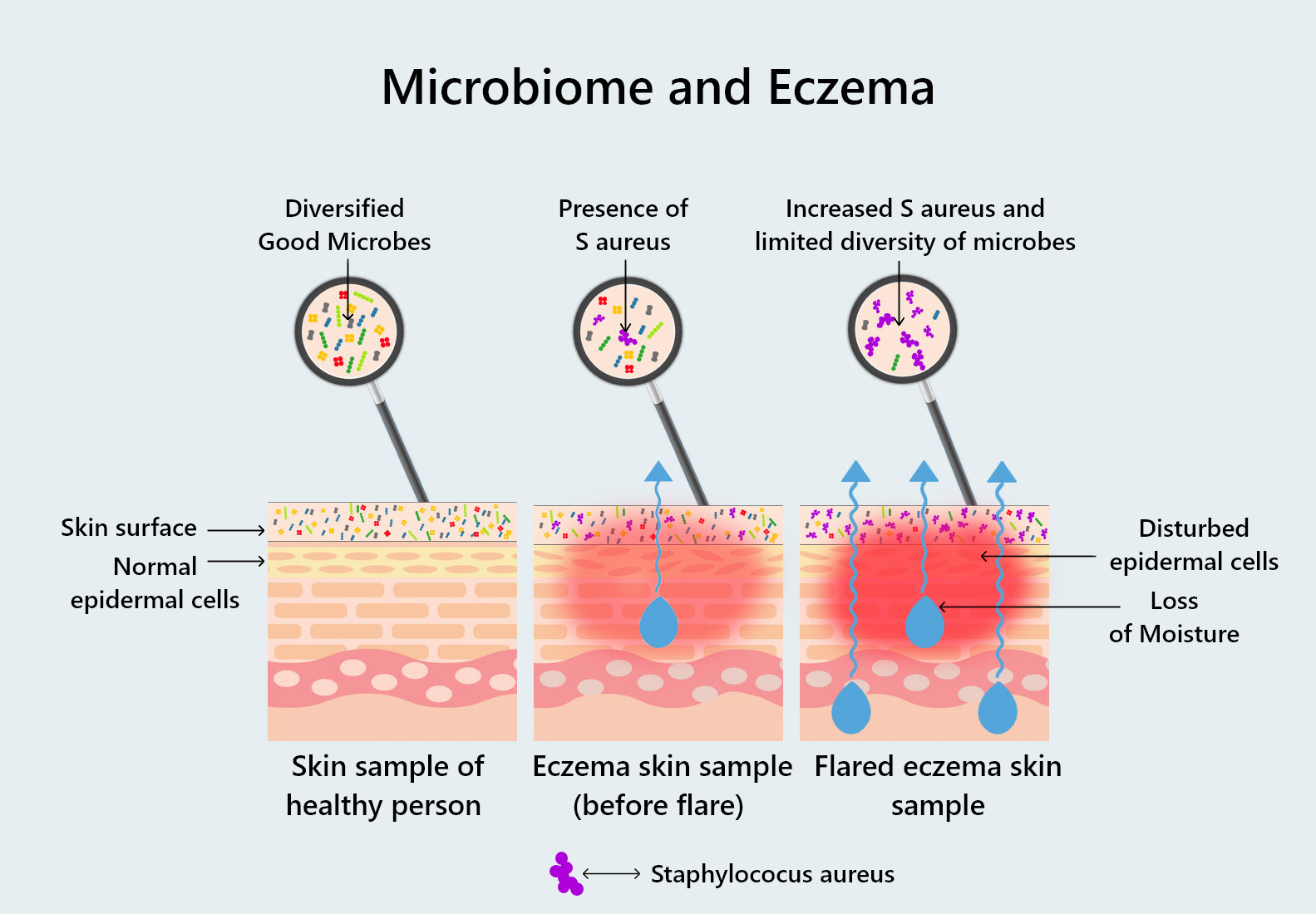 Moreover, it was also found that the presence of S. aureus results in skin barrier dysfunction further delaying the healing process in Eczema.

For further clarification on the role of S. aureus in the development of Atopic Dermatitis, the researchers collected samples from human skin and administered colonies of the bacteria to the mouse. The skin on the mice became inflamed and thick. They found that S. aureus made use of a process called “quorum sensing” as a means of communication between S. aureus individuals.

The bacteria use it to know when to release toxins and enzymes that break down the skin barrier, allowing the bacteria access to interior parts of the skin, which causes flareups.

While the problem is caused by one microbe the solution was also found in other microbes. While screening the S. aureus killing strains, a couple of bacteria that dwell on the skin was found they were Staphylococcus epidermis and Staphylococcus hominis.

These bacteria living on the skin and fight off the toxins using proteins called antimicrobial peptides that interfere with quorum sensing. When the researchers cultured some of the “good” bacteria and applied it to the skin of mice with eczema, it prevented flareups. 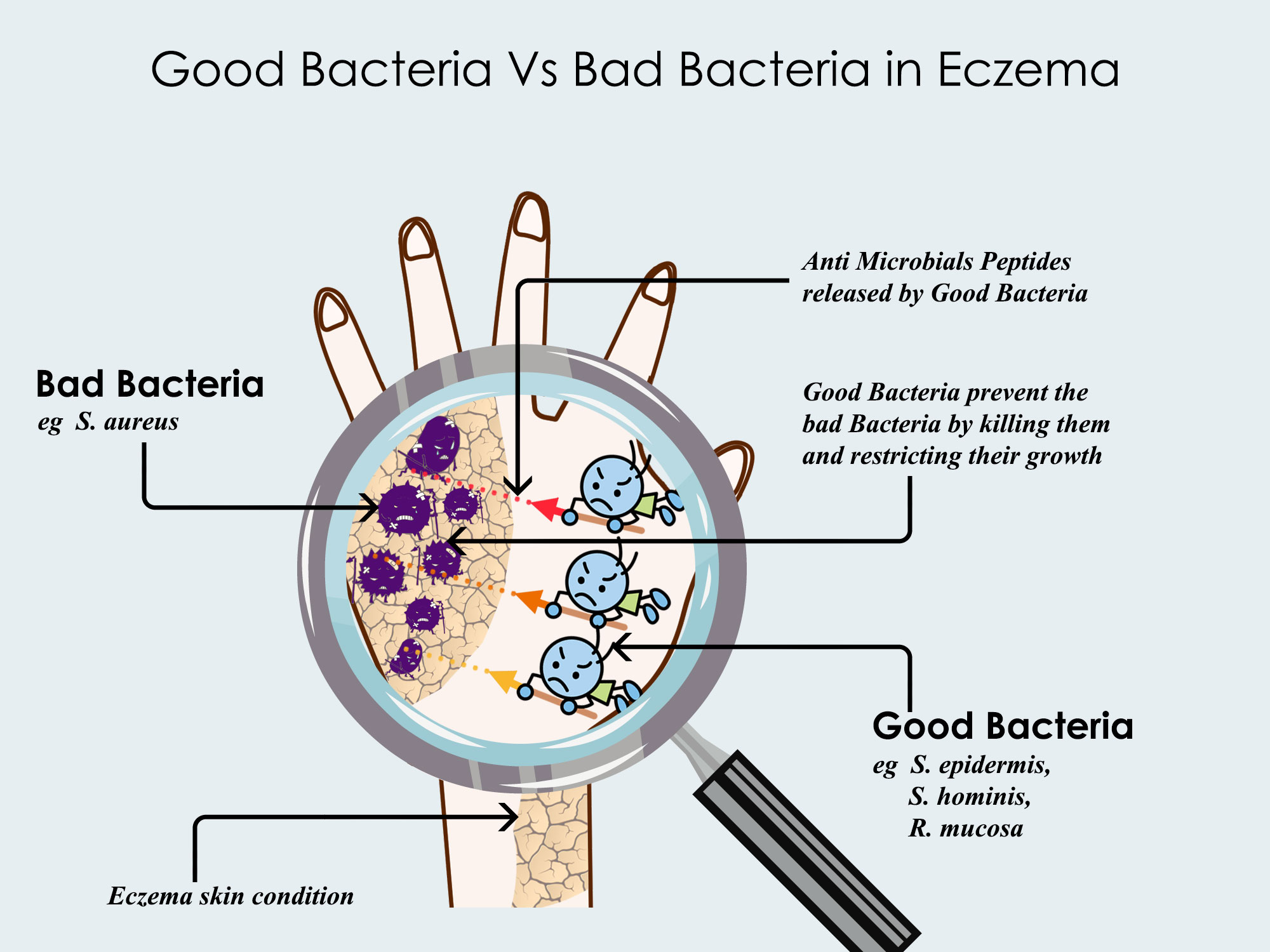 Similarly, in another research by Ian A Myles [2], another gram-negative bacteria called Roseomonas mucosa was found to be improving the skin barrier function, immune balance, and property of killing S aureus which when sprayed on mice prevented it from developing Eczema.

A topical lotion with S. epidermis and S. hominis strains to test their effects on atopic dermatitis patients was created by Dr. Gallo’s and team. Application of this lotion on volunteers suffering from eczema gave results in 24 hrs vanishing S. aureus. The same Lotion without these microbes remained ineffective on the patients.

For testing the therapeutic effect of R mucosa in humans with AD live strains of R mucosa isolates were sprayed on eczema of each participant twice weekly for 6 weeks in adults. There was a significant decrease in a rash, itch and the need for topical steroids.

It was also found that while the helpful S. epidermis and S. hominis strains are abundant on the skin of healthy people, they are rare on the skin of atopic dermatitis patients. This suggests that they provide the first line of defense against the pathogen causing the skin barrier dysfunction leading to the onset of Eczema. The Exact reason why some human body fails to develop these good bacteria is still unclear and requires further research.

As there are numerous treatment options and precautionary measures available for treating eczema, the different method works for different individuals. The treatment also depends on managing triggers and care routine. The theory of treating eczema with microbes is an interesting development in treating eczema. This method will be effective as it directly acts on the actual cause of the flare-up i.e. killing the S. aureus bacteria. These studies and experiments will aid in developing effective treatments consisting of Microbiome. Methods and solutions to improve the healthy skin Microbiome shall also play a crucial role in preventing and treating Atopic Dermatitis