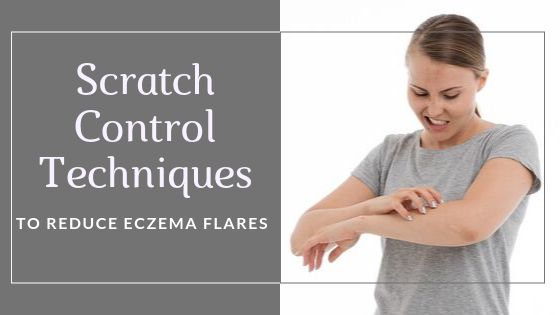 An itch that cannot be scratched, this is what explains eczema which is usually recognized by a dry, red, inflamed and itchy rash skin condition. Rather the phrase can be modified as the “itch that should not be scratched” because there is only a small percentage of people who do not fall prey to scratching. The incessant and uncontrollable itch which is associated with eczema known as “scratching eczema”. One can also go with the eczema flare-up treatment to reduce the itching problem.

Apart from the medicinal treatment, it is very important to bring about a behavioral change, while suffering from Eczema. The reason being, the action of scratching will worsen the skin condition  –  eczema causes itching, itching results in scratching, and it’s the scratching which further results in worsening eczema. This thereby leads to more itch and the cycle continues.

In this article, we shall discuss various aspects of itching and scratching and eczema flare-up treatment and by the end, you shall have a clear understanding and a solution to escape from this vicious itch-scratch Cycle.

Often “itch” and “scratch” are used interchangeably to describe the same thing or same event and in many native languages the word used to describe these two are same. In reality and clinically too, these word means different things. To understand the treatment action for Atopic Dermatitis it is critical to distinguish between itch and scratch.

– Itch
Itch is a sensation which is defined as an uneasy irritating sensation in the upper surface of the skin usually caused as a result from mild stimulation of receptors that originates in the skin. Medically it is known as Pruritus. A person gets an itching sensation when factors such as irritants, allergens, dry skin, stimulate a nerve ending in in the nerve fibres in the epidermis.

– Scratch
As a stimulus for the itching sensation, a message is sent to the brain which sends a response and this action is called scratching. This leads to scratching eczema. Traditionally scratching is regarded as a way to relieve oneself by reducing the annoying itch sensation. However, there are even negative aspects to scratching, as one would find noxious scratching highly pleasurable. This action can very be problematic with chronic itch patients, such as ones with eczema. The patient might scratch the affected area until they no longer produce a pleasant or painful sensation. This sensation though subsides itch, which gives very short-term temporary relief further worsens the skin condition.

Actions such as rubbing, touching and pricking the skin due to itch come under the scratching activity also known as scratching eczema. Hence as a statement, we can say that

Itch is a feeling, while scratching is an action or behavior towards that feeling

Scratching in atopic dermatitis is a little complicated than it appears from the definition which is a response to the itch. In eczema people tends to scratch due to two different reasons i. e. scratching in eczema can be classified into two categories:

1) Scratching due to an Itch (Neurogenic):  This is scratching stands as per the definition, It is a response to the signals sent by the nerve fibers due to itching sensation. In this case, a person scratches only when he feels the sensation of itching. Hence as a treatment action, one just needs to focus on treating the eczema symptoms.

2) Circumstance or behavioral Scratching (Psychogenic): This scratching is from the unconscious mind or can be said as a habit due to repetitive actions. Any behavior which is repeated number of times becomes a habit and people tend to do that action automatically with or without being required. In this case, a person may scratches due to his behavior even if he doesn’t have itching sensation.

“Circumstance scratching” is more dangerous as repeated scratching damages the skin layer making it thick, and red. It further does not allow eczema to heal making the eczema condition chronic. This scratch is psychologic and may result due to, boredom, while thinking, frustration, stress, etc. The treatment action for this situation requires a behavioral change know as Habit Reversal. 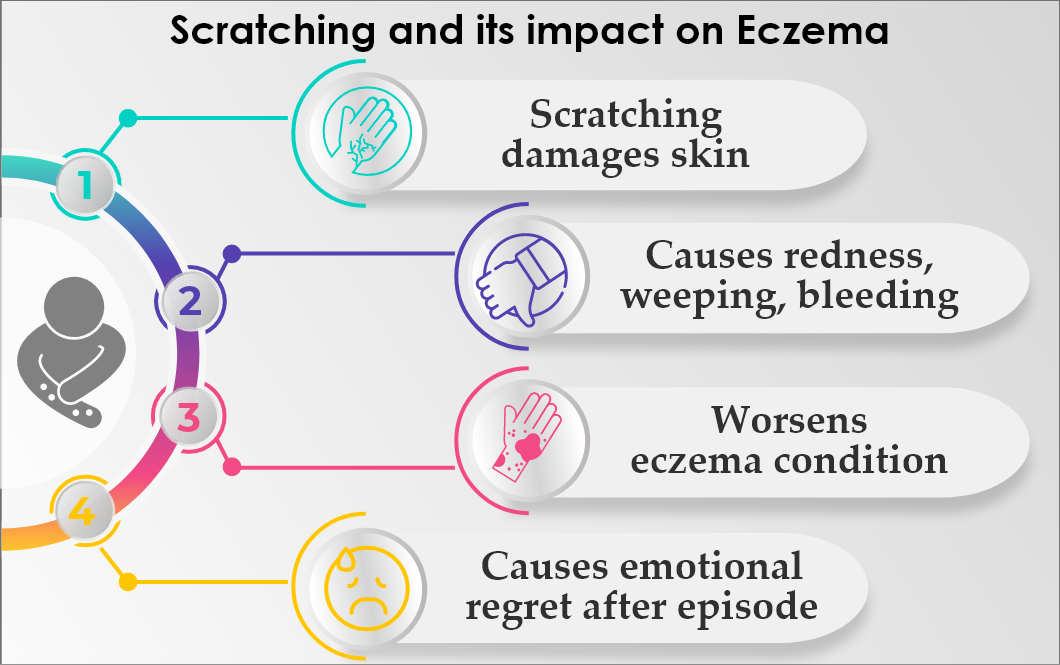 If one can understand these aspects of scratching and its relationship with the itch, it becomes easy to treat and improve the condition of eczema. 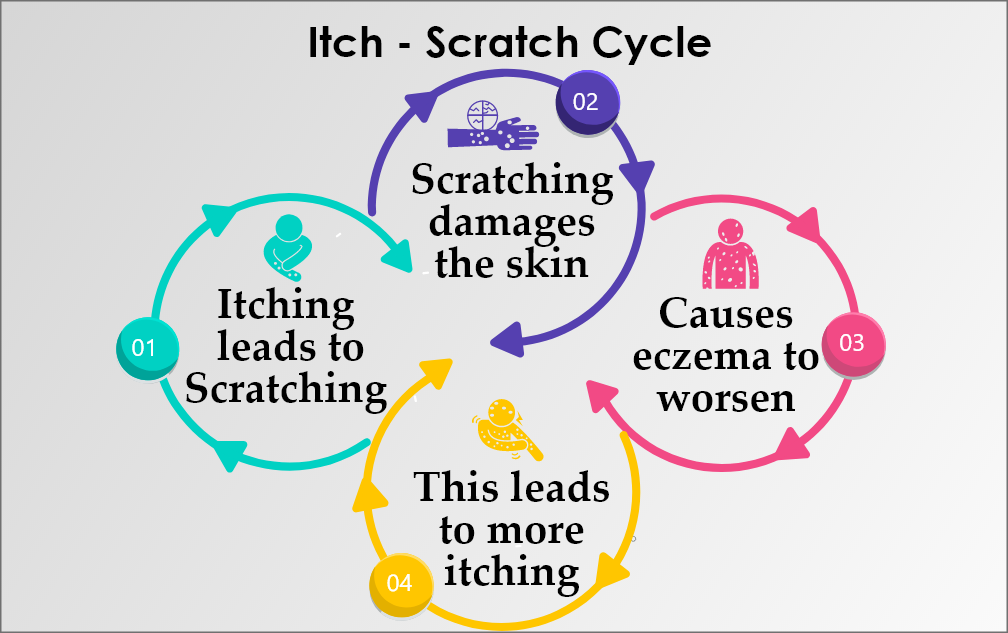 Itch- Scratch cycle where the itching leads to scratch and scratching leads to itch is a well-known phenomenon.  Let us understand this cycle in a little more detail,

– In people with atopic dermatitis, when eczema flares up, immune cells send inflammatory signals to the surface, causing the itchy rash leading to an itching sensation.

-This itching sensation causes the person to scratch which in turn damages the outer layer of the skin allowing microbes and allergens to enter.

-As a response to these invaders, the immune cells continue to send signals to the surface, causing even more redness, rashes and itching even more

-Thus, resulting in more scratching and ultimately the skin barrier breaks down, and the itch-scratch cycle continues.

In normal circumstances of scratching a person scratches only when it itches, or his skin gets irritated due to a mosquito bite or any allergen. Whereas in condition like chronic eczema a person gets habituated to scratching.

When a person performs an action again and again, repetitively due to certain situation, it becomes his habit and the person tends to repeat it automatically even in the absence of that situation. Similarly, in chronic eczema, the person scratches whenever it itches multiple times and due to chronic condition, it continues for a long period of time. This now becomes a habit so much so that the person scratches frequently without any itching more than he does when he gets an itch

Hence it is very critical to put an end to this itch-scratch cycle while treating eczema. As the itching is caused due to eczema itself, the key to end it is to control your action of scratching. which will stop further damage to the skin. Meanwhile, you can treat your eczema symptom which leads to itching ultimately breaking this cycle.

How to Track the Scratch?

Any treatment starts with analyzing the severity of the symptoms, similarly, it is good to track and analyze all the episodes associated with the scratching in the first place to understand the behavior more deeply. Close people surrounding you can also be asked to help track it for you in order get a comprehensive statistic regarding the behaviour which may help to find an appropriate solution.

In order to track the scratching, one should note down factors of scratching like:

How to prevent scratching?

Itch and scratch is something that each and every patient suffering from eczema has to face day in and day out specially when it flares. Itch is the worst thing that occurs in eczema as it is difficult to get rid of. Further adding to it the most frustrating part is trying not to scratch your itchy skin. 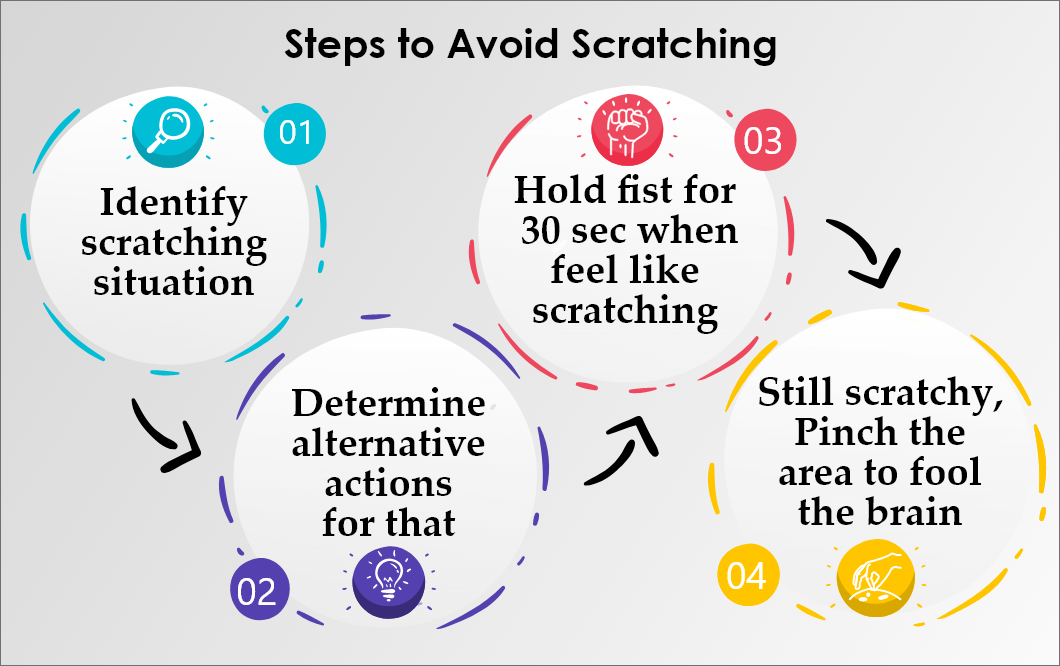 One of the best ways to deal with itch without scratching psychologically is holding the fist tightly for 30 secs, you can count till 30 in your mind this should help in reducing the itching sensation. If it still feels itchy than pinch or poke a nail on the skin to fool the brain. By doing this your brain shall give you a little paining sensation but will subside the itching sensation.

Other tips to avoid scratching 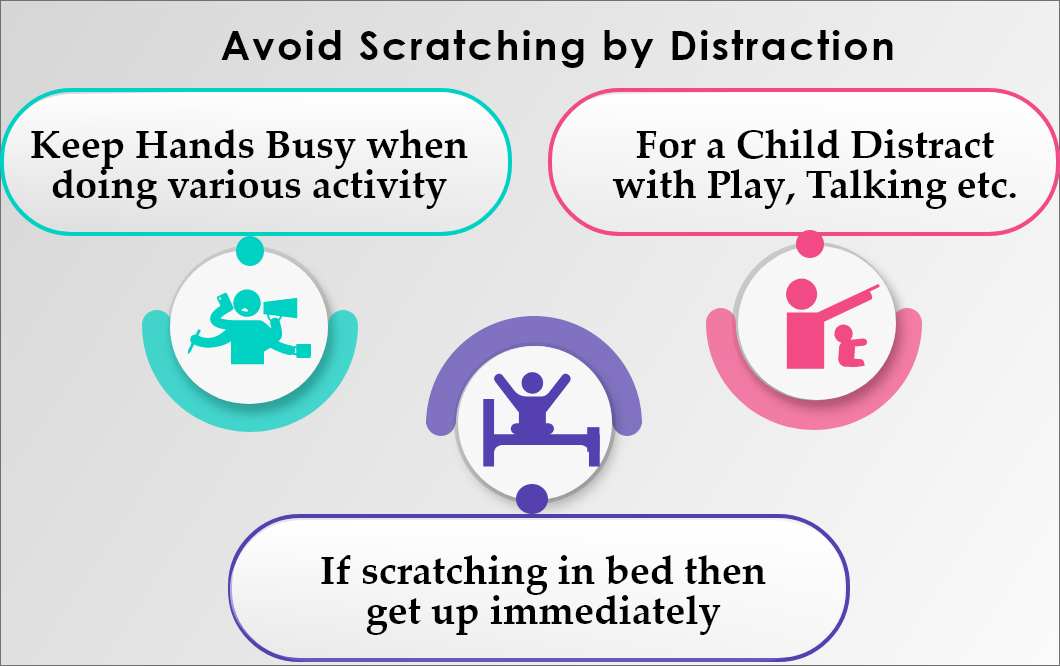 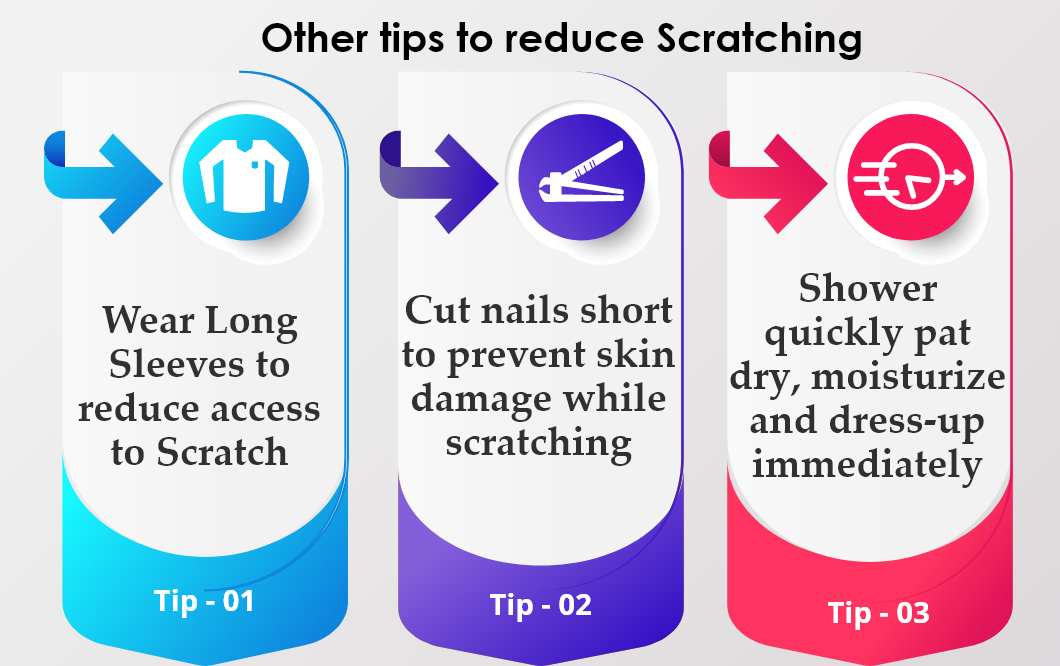